The Maryville Police Department have arrested a suspect in a child molestation case.
A press release from the Marysville PD states :

“On Tuesday, May 7th 2019. Marysville Police Detectives arrested 27 year old Anthony Daniel Hayward Jr or Marysville for lewd and lascivious acts on a child under the age of 14. The investigation began in April of 2019 when the child’s mother reported the crime to the Marysville Police Department. Marysville Police Detectives immediately began an investigation and interviewed the victim. The 11 year old female victim told detectives that Hayward Jr began sexually molesting her in early 2015. In late 2015 Hayward Jr was sentenced to prison for Assault with a Deadly weapon and Burglary. Hayward Jr was released from prison in June of 2018 when the molestation of the victim started again. The victim stated the abuse would occur when her mother was away from the house for work or trips. The victim said the molestation would occur several times a month in 2015 and again in 2018/2019. The victim and Hayward Jr are related. At the time of the molestation the victim lived in Sacramento, Yuba City, and Marysville. The Yuba County District Attorney’s Office will be taking jurisdiction of the abuse in all three cities.
On 5/06/2019 at approximately 12:30 pm, Hayward Jr voluntarily came to the Marysville Police Department and provided a statement. Hayward Jr was subsequently arrested for lewd and lascivious acts on a child under the age of 14, sodomy, and sexual penetration of a child under the age of 14. Hayward Jr was booked into the Yuba County Jail and is being held on $425,000 bail.

If you would like more information about this topic, please contact Lieutenant Adam Barber at 530.749.3952 or email at abarber@marysvillepd.org. 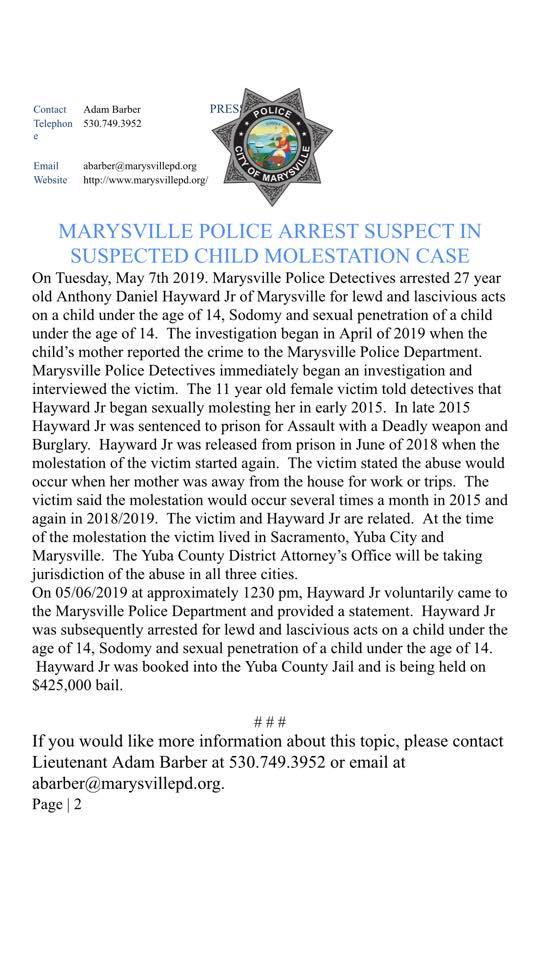